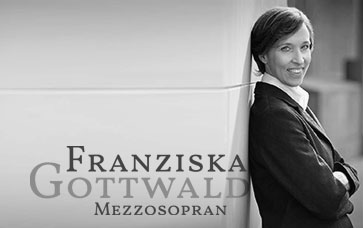 Franziska Gottwald was born in Marburg an der Lahn. Near the end of her university studies in voice pedagogy and opera, she became a member of the soloist ensemble at the Deutsche Nationaltheater in Weimar for 4 seasons while also embarking on her solo career.

On the opera stage, she has appeared as a guest artist in roles such as Cherubino and Sesto (Mozart), Ariodante and Ruggiero (Handel), Orfeo (Gluck), Hänsel (Humperdinck) and Prinz Orlofsky (J. Strauss) at the opera houses in Seoul, Toulouse, Tokyo, Venice, Bilbao, Basel, Cologne, Stuttgart, Hannover, Wiesbaden, the Komische Oper Berlin and the Semperoper in Dresden.

Frequent work with conductors such as Reinhard Goebel, Ton Koopman, Andrea Marcon, Fabio Biondi, Nicholas McGegan and others, has solidified Franziska Gottwald’s reputation as an expert in historical performance practice. Further acknowledgement of her accomplishments in this area came from her winning the1st Prize at the International Bach Competition in Leipzig.

Franziska Gottwald can be heard in many radio, DVD and CD productions, such as Vivaldi’s Merope under the direction of Fabio Biondi and L'Olimpiade: The Opera under Markellos Chryssicos and Handel’s Samson under Nicholas McGegan.